While Norman Borlaug’s legacy is centered on his heroic efforts to confront and overcome hunger in foreign lands, it is insightful to understand that his earliest time coming face to face with hunger was not in Mexico but in the streets of Minneapolis.

When we were together, Norm told me about how as a student at the University of Minnesota he first came face to face with the issues of hunger as he watched it manifest on the streets of the Twin Cities during the Great Depression. Seeing homeless, hungry people sleep in the streets was an image that remained with him even 70 years later.

Throughout his career, whether he was working in Minnesota, Mexico, India or Pakistan, Norm felt the same urge to push the needle further.

Where hunger was prevailing Norm always felt himself impacted by the devastating effects that inevitably accompanied it. It was what drove him and caused him to work diligently throughout his life on the issues of plant disease, as he harnessed his abilities with plant breeding to ensure his active participation in alleviating human suffering.

Years after Borlaug's initial experience with hunger took place in Minnesota, the World Food Prize was awarded in 2008 to two individuals with midwest roots for their work with school feeding programs, Bob Dole and George McGovern. Both men, who despite their difference in political views, were united by their desire to directly confront hunger.

It was when they received the World Food Prize in the House Chambers of the Iowa State Capitol that each spoke of his own personal experiences he had had as a young boy during the Depression. Like Borlaug, Dole recalled the hungry and the homeless who would knock on his front door in Kansas pleading to work for food. McGovern too had recollections of his life back in South Dakota and of his mother sharing the religiously grounded songs urging him to greatness through the uplifting of others.

As we look forward to the celebration of what would be Dr. Borlaug's 105th Birthday on March 25, remembering the journeys of these three midwestern heroes should encourage us all to be motivated by their great legacies.

If Borlaug was here today as we celebrate what would have been his Birthday he would say that the most critical thing is to support the public research that is so desperately needed to ensure that we have the innovations that will allow us to meet the greatest challenge the world has ever seen, nutritiously and sustainably feeding a world that will have nearly 10 billion people by 2050.

Join the World Food Prize on March 25 as we celebrate the 105th anniversary of our founder Dr. Norman E. Borlaug’s birth. The World Food Prize Hall of Laureates will be open to the public for a day of FREE activities for all ages from 9 a.m. - 2 p.m.

You can enjoy a children's storytime, tour the building with the Iowa artists exhibited in our Iowa Gallery who have studied and painted Dr. Borlaug, hear from the sculptor who created the Dr. Borlaug Statue in Statuary Hall in the U.S. Capitol in Washington, D.C., explore our interactive educational exhibits about Dr. Borlaug, watch a riveting documentary about him, and view Howard G. Buffett's breathtaking international photography exhibit.

MUSEUMS for ALL
The Greater Des Moines Botanical Garden 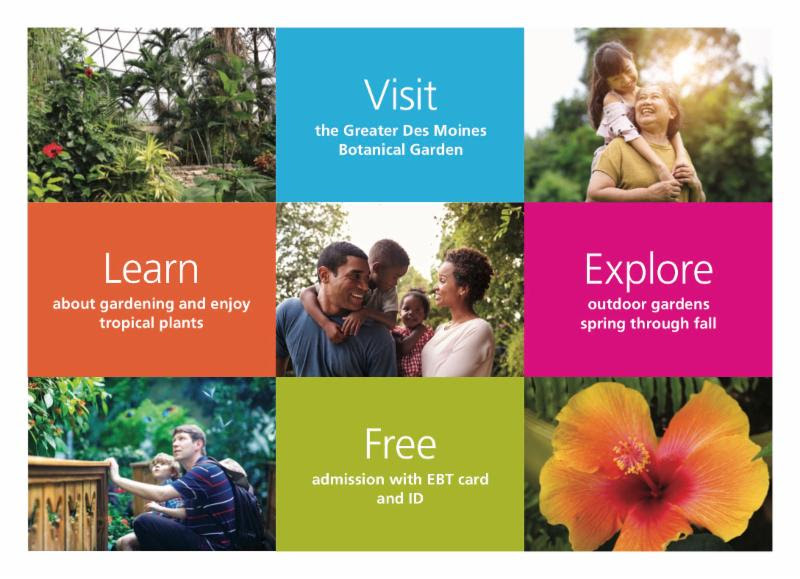 The winning art piece will be revealed at the2019 Iowa Hunger Summit on Monday, October 14th and used as the focal point of the 2019 Borlaug Day poster. It will be shared with classrooms across our state to educate and inspire students to aspire to be Iowa's#NextNorm.

More information can be found atwww.WorldFoodPrize.org/PosterContest

Be sure to let us know if you have an event coming up!
Submit event's to the Iowa Hunger Calendar Here!