The Iowa Hunger Directory is an initiative to profile all organizations fighting hunger from Iowa, serving as a comprehensive platform for those seeking to engage and collaborate in this area. The Directory includes a description of each organization along with contact information and a brief explanation of how Iowans can engage with them.

A Message from the World Food Prize President

In issuing the 2018 Iowa Hunger Directory, we do so recalling the legacy of two of Iowa's greatest humanitarian leaders: the late Nobel Peace Prize Laureate and World Food Prize founder Dr. Norman E. Borlaug and former Governor Robert D. Ray who passed away earlier this year on July 8.

With Dr. Norman Borlaug and former Governor Robert Ray as our inspiration, and such great Iowa heroes as George Washington Carver, Herbert Hoover and Henry A. Wallace serving as avatars of humanitarian endeavors, Iowans have an amazing array of leaders to emulate. The one theme that unites all Iowans is the pride we share in feeding people and alleviating hunger around our state and around the world.

In that regard, each October we present our Robert D. Ray Iowa SHARES Humanitarian Award to an individual(s) who has been at the forefront of such efforts. The award is meant to recall the extraordinary humanitarian leadership Governor Ray provided in responding to the tragic circumstances he and I encountered in October 1979, when we visited the Thai-Cambodian border. There, we saw over 30,000 starving and emaciated Cambodian victims of the Khmer Rouge/Pol Pot Genocide. They were dying at the rated of 50 to 100 a day, with their bodies being bulldozed into mass graves.

Upon returning to Iowa, Governor Ray created Iowa SHARES - Iowa Sends Help to Aid Refugees and End Starvation, with bipartisan support and the involvement of all major religions. Funds poured in from Iowans across the state, which was used to rush food and medicine and volunteer doctors and nurses to Cambodia with life sustaining support. Eventually close to $2 million (in 2018 dollars) was raised, almost all from small individual donations.

To recall this exceptional state-wide humanitarian endeavor, and to inspire future humanitarian efforts, in 2013, we create the Robert D. Ray Iowa SHARES Humanitarian Award. Given Governor Ray's passing away this summer, at the 2018 Iowa Hunger Summit we will have a special program to commemorate this historic lifesaving program and the Governor's exceptional leadership.

The World Food Prize created the Iowa Hunger Summit in 2006 with the support of our four former governors: Robert Ray, Terry Branstad, Tom Vilsack and Chet Culver. They all came together with Dr. Borlaug in this famous photo. We were so very pleased that very quickly the Iowa Hunger Summit became the largest and most well attended annual state-wide conference on this key humanitarian issue. We have received feedback from attendees about the importance they attach to the free and open-to-the-public Hunger Summit as a key place to network with colleagues and get ideas for best practices.

Designing an online Hunger Directory was a logical next step. We have been enormously gratified that since its creation in 2012, over 500 Iowa organizations representing all 99 counties have joined the Directory.

The Iowa Hunger Directory was created with three clear goals:

The idea for the Iowa Hunger Directory was born from discussions at the Iowa Hunger Summit with the dedicated representatives of organizations from across our state who expressed an interest in having such a central repository of information available.

The organizations listed in the Hunger Directory therefore represent an amazing amalgamation of passionate humanitarians carrying forward Dr. Borlaug's, Governor Ray's and our state's historic legacy, and thereby demonstrating that Iowa truly is the "Hunger Fighting Capital of America."

Thank you for your interest and for all that you do to eradicate hunger, poverty and malnutrition. 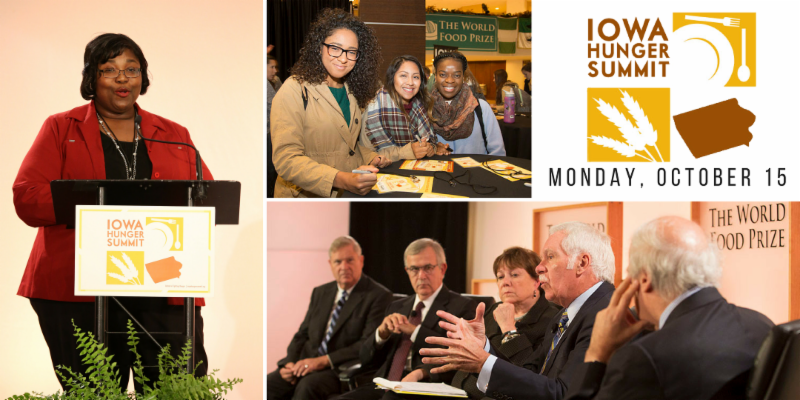